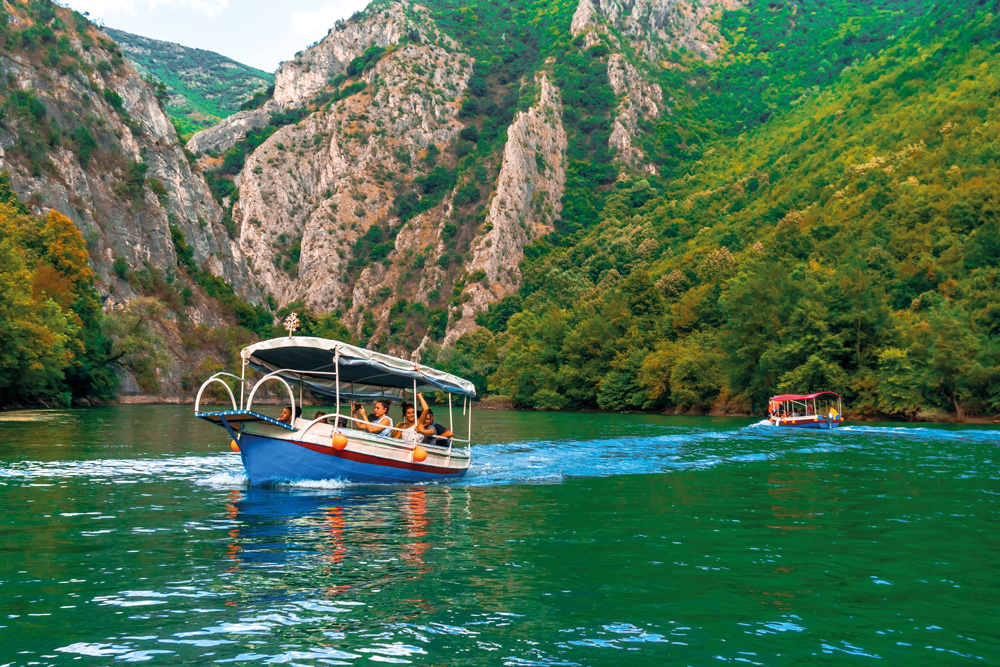 Meeting at the airport at 1:30pm to leave on a Wizz Air direct flight at 3.45pm to Skopje arriving at 5.25pm. The coach will take us to our hotel, we will be given our rooms and we will have our first dinner together.

After breakfast we will have a city tour in Skopje, the capital, a very attractive tourist destination with its fortress, cultural and historical monuments and archaeological sites. We will see the old station, the archaeological museum, the memorial house of Saint Teresa of Calcutta, North Macedonian Square, the Stone Bridge, the old bazaar, the church of St. Spas with the beautiful wood-carved iconostasis (19th century), a once Hammam now an art gallery, and a Mosque (both 15th century) and much more. Afterwards we will take a cable car ride to the Millennium Cross a 66 meter-high cross, a memorial of 2,000 years of Christianity, situated on the top of the Vodno Mountain.

Tetovo, our first destination today, is one of the largest cities in North Macedonia. We will visit one of its most important monuments known as the Painted or Decorated Mosque. It was originally built in 1438 and later rebuilt in 1833 by Abdurrahman Pasha. More than 30,000 eggs were used to prepare the paint and glaze that went into the elaborate decorations. We will proceed to the Matka canyon, a unique monument of natural beauty with rich flora and fauna, than to the church dedicated to the Apostle St. Andrew from the second half of the 14th century and after embark on a boat trip to the Vrelo Cave which gives the possibility to truly admire the striking nature of this place.

We will check out the hotel in Skopje after breakfast to head to our next destination Ohrid. On the way we will visit Stobi, an archaeological
site, thought to be the most important excavation in North Macedonia. The city of Stobi is mentioned in documents from the 2nd century B.C. Some relaxing time at the famous Popova Kula Winery one of the success stories of North Macedonian viticulture. Here we will enjoy a delicious traditional lunch including wine tasting. In Ohrid we will be given our rooms and in the evening we will go for a pizza together (not included in price).

After breakfast we will go for a sightseeing tour of this UNESCO World Heritage City. We will visit the old town of Ohrid with the church of St. Sofia, showing the link between Byzantine and Italian Renaissance art. It was built between the 11th and 14th century and was the seat of Archbishop St. Clement. Also, St. John at Kaneo, which stands alone on a small peninsula providing spectacular panoramic views of the lake and surrounding mountains. We will take a good peak at Samuil Fortress and the Ohrid Bazaar, selling the unique Ohrid pearl, which is widely popular in Europe and in the world. We drive to the village of Vevcani built on a steep hillside and sheltered by a mountain with appealing old houses and buildings of all styles and shapes. The famous Vevcani springs have a water flow of between 400-4000Lt/sec which explains the many watermills in this area. We continue to Struga where the Black Drim river starts its journey to the Adriatic. Sun Bathing the rest of the afternoon. We return to Ohrid for dinner.

Price of €795 on Half Board basis (per person in a double room) includes:

We will start the day with a spectacular boat ride which will take us to St. Naum Monastery. At the monastery we follow the path of St. Naum, meeting the legends of all the miracles he made before and after he built his church on the top of the rock. After visiting the monastery, we drive to the beach of Ljubanishta for some relaxing time swimming. In the afternoon, a quick visit to the beautiful fishing village, Trpejca before continuing only a few kilometers north to visit the bay of bones museum on water. We return back to Ohrid for dinner at the hotel.

Today we visit Heraclea, the vividly preserved city from the surviving Ancient North Macedon Empire and Bitola the second largest city and the oldest in the country, historically known as Monastir or Manastır. Afterwards we walk through the beautiful mains street and visit the rich Museum of Bitola. Time for shopping. Dinner at our hotel in Ohrid.

Checkout after breakfast, we load the coach and head to Skopje airport leaving North Macedonia on a Wizz Air flight at 1:15pm arriving in Malta at 3:00pm.